How I Made a Children’s Book in 10 Days: From Idea to Publication 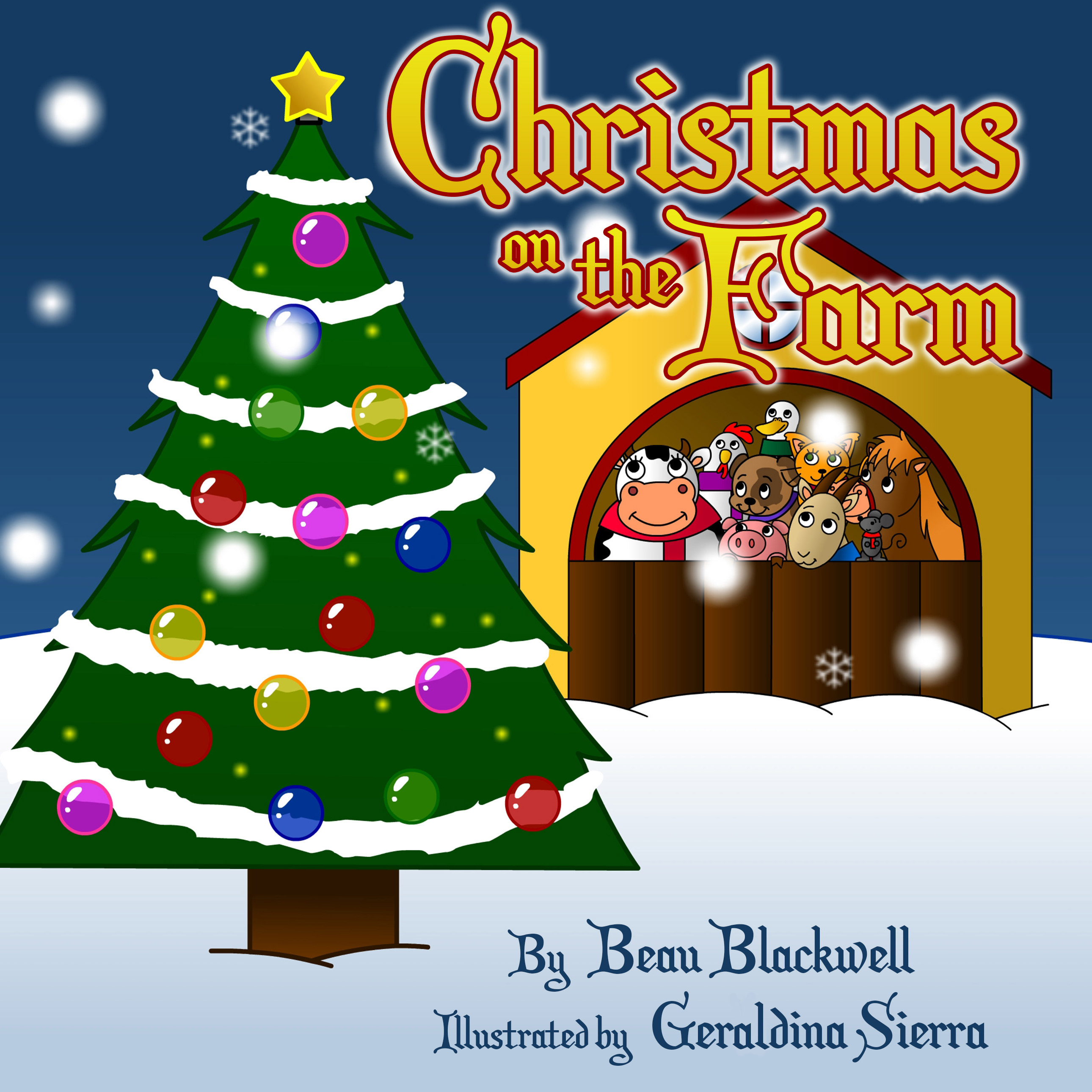 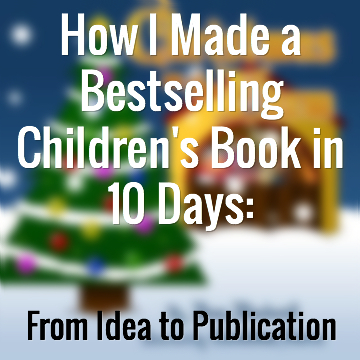 A few days ago I published my third book, called Christmas on the Farm. I’m really happy with how it turned out, but the reason I’m writing this post is to share with you how I went from having the idea for the book to having it live for sale on Amazon in 10 days(!). Considering my first book took about 2 months to go from idea to publication, I’m obviously getting a lot faster in turning books around 🙂 In this post, I’ll share with you how I did it, so you can hopefully get your books out quicker as well! [And if you’re interested in how the book performed, see my “Update” below -Beau]

I got the urge to write a Christmas book a couple of weeks ago after speaking to another children’s book author who ran a free promotion of his children’s book around the same time as my own free promo. His book got far more downloads and post-promotion sales than my did, so I wanted to figure out what I could be doing to get better results.

One of the biggest differences I could see is that his book was seasonal– specifically, it was a book about baking pumpkin pies, and he ran the promotion the week before Thanksgiving. This gave me the idea to try to get a Christmas book published before the holiday, so that I could do promotions and advertising that would hopefully not only drive sales of that book, but my other books as well!

Once I had the idea to do a Christmas book, I decided to do a rhyming book about animals celebrating Christmas on their farm. I knew I wanted to focus on ideas like generosity, friendship, and gratitude, and how they’re more important than getting presents.

Once I had my idea, I started brainstorming specific rhymes by thinking about words I would use in a book about a farm: names of animals, Christmas-related terms, and those kinds of things. For some reason, this part usually flows very quickly for me, although I’m not ashamed to admit that I usually have an online thesaurus and rhyming dictionary open in my browser so I can come up with rhymes or figure out different wording if I can’t make a rhyme work.

Writing the book took me a total of about an hour (it’s 15 pages, so very short), and after that I gave it a quick edit and then ran it by my wife and kids by reading it out loud, to make sure it flowed well, had a good rhythm, and generally wasn’t terrible 🙂 Once I got their approval, I immediately sent it over to my awesome illustrator and asked her to start working on it ASAP.

I’ll be totally honest here: part of the reason I’m able to turn books around so quickly is that my illustrator, Geraldina, is amazingly fast. I send her my script with notations about where I want illustrations to accompany the text. She usually gets sketches back to me in a day or two, which I then give feedback on or approve as is, and she starts working on the final versions, which she does on a computer.

She was able to turn around the entire book (11 on-page illustrations plus the cover) in just about a week. Like I said, she’s fast 🙂 Even if your illustrator isn’t this fast, though, the process of having them send sketches for you to review, and then promptly getting feedback or approval back to them, can make the process much faster.

Another thing I did that sped the process up was to keep working on the book while I was waiting for other pieces to get done. For example, I got the on-page illustrations before the cover was finished, so I immediately started formatting the book and getting it ready to publish while waiting for the cover. I also spent time writing up the description and figuring out a “launch” marketing plan while the book was being illustrated.

That’s one big change I’ve made since I started writing that has helped speed things up a lot- I tried my best this time to keep things moving as fast as possible. In the past I would write the book and then wait several days to send it off for illustration, or get illustrations back and then take a few days off before starting to format it. This easily added a week or more to the process, without gaining me anything. By forcing myself to keep taking constant action, I was able to get the book out much faster than I previously had. While it may not seem like a lot, this level of productivity should be able to let me publish at least 3 or 4 more books a year, which helps overall sales significantly.

1. Take massive action – As someone who’s always had a tendency to overthink things and second guess myself, it felt really weird to have an idea, sit down and write it, and send it off to be illustrated in a single day.

But you know what? I’m incredibly glad I did. One of the big reasons I didn’t hesitate is that I knew I needed to get the book done well in advance of Christmas, since I don’t expect to make any sales of it again for a while after that, but there’s no reason I can’t replicate this kind of decisiveness for future projects.

If you’re an overthinker like me, I really recommend just trying this kind of massive action taking once, so you can see how exciting it is and how good it feels. After all, wouldn’t you rather say you shipped your book than just wishing for it or “thinking about it?”

2. It gets faster with each book – I’ve cut down the publication time of each of my books significantly from the one before, and one big reason is that I’ve been able to leverage the work I did on the past books.

For example, instead of creating a completely new Word document for this book, I used my document from Natasha the Ninja Princess and just swapped out the text and images. This meant that the annoying formatting issues I ran into before, with text overlapping onto other pages or not displaying properly, wasn’t a problem this time around. This made publication time a lot faster.

The same goes for the cover (especially the print version)- it took me about 5 tries to get the cover right for the first and second books, because I kept getting the dimensions wrong or had issues with it getting cut off by the print process. This time around I was able to use what I learned from the last book to get my cover correct in only 2 tries. Still not perfect, but much, much less frustration and hassle!

All in all, this was a great exercise for me, and I’m really excited that I went for it and got my book done so quickly. I’m already starting to see the benefit from it in terms of increased sales for my other two books, and since I’ll be running several free promotions of Christmas on the Farm over the next few weeks before Christmas, my hope is that it’ll pay off even more!

If you’ve been thinking about doing a children’s book for a long time or have one written but just haven’t gone through the rest of the process, I really recommend setting yourself a deadline and just taking massive action to get it done and out into the world! I promise you, you’ll be glad you did.

Wow! I never imagined when I published Christmas on the Farm that it would go on to be my bestselling (and most downloaded) book so far. It did extremely well in the month of December, like I expected, but the interesting thing was that it continued to sell well all the way through January as well, even though Christmas was over! To date it has outsold my other books (and gotten more reviews) by a significant margin, which goes to show the power of seasonality and (I think) having an attractive, inviting cover.

Even besides all of the copies I sold, this screenshot was my favorite result from publishing this book. It happened while running a free promotion of the book for one day in December: 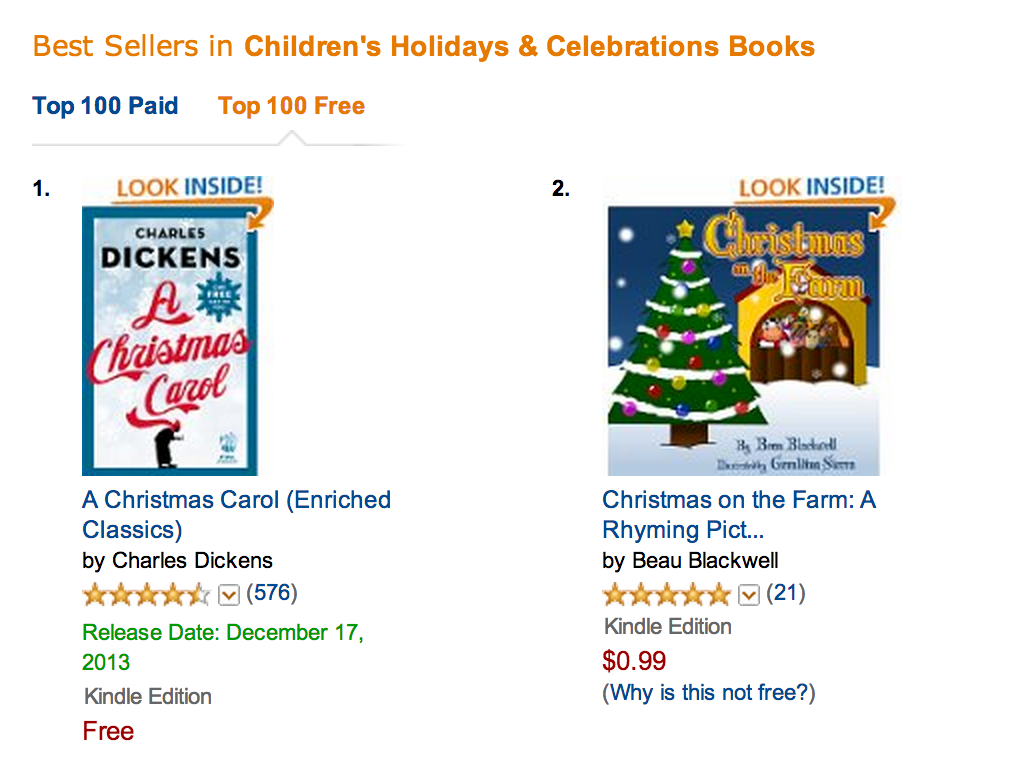 That’s me in the #2 spot in the entire Holidays category, with #1 being none other than Charles Dickens 🙂 It was a pretty proud and exciting moment, to say the least!

One of the best things? Since it’s a seasonal book, I expect to be able to sell lots of copies of it again each December—woohoo! After the results from this book, I definitely plan to keep writing and releasing more seasonal books as I can think of them.

Want more help?
Get my free guide: 6 Steps to Self-Publishing a Children's Book!
This one page checklist breaks down each step, from idea to promotion! Plus you'll get more great articles and updates like the one you just read.

Get my FREE checklist: 6 Steps to Self-Publishing a Children's Book!

Your email is safe.

Hi, I'm Beau. I'm the author of 4 children's books and a dad to two awesome kids. I started this site to help aspiring children's book authors like me to get their books written, illustrated, formatted, published, and sold. Find out more here.

Need Help? Set Up a Call!